Ludicrous Games will shortly be releasing their debut title Guntastic, which will be available on Xbox & Steam (PC & Mac). But I’m here to tell you about what Guntastic is, and what I thought with my time with the game.

Guntastic is a very fast paced 2D Party Brawler, and Ludicrous Games themselves describe the title as a “frantic homage to the 16bit coin-op games of the past!”. The game revolves around quick, frantic and chaotic rounds where your objective is to get as many kills per round as possible. Each match can have up to 4 players, with couch co-op being a big push here; the game also comes with an added online mode & also the option to play against AI. Players have the ability to choose between 8 different characters to play as and a handful of maps to rain hell down on each other on. Each round lasts probably no longer than 25 seconds, and when I was playing, some would be no more than 10 seconds. There is a countdown, you run to snatch the weapon that randomly spawns in front of you, and you rush to eliminate other players. Weapons range from homing rocket launchers, grenade launchers that walk once fired, to guns that fire drills that plough through the map to catch opponents off guard. Every single weapon will kill in 1 shot, so there is no room for error whilst manoeuvring around. Powerups will spawn after a round has begun, but in my case everyone was already dead before they had the chance to even see the powerup. That is essentially the core experience of Guntastic. 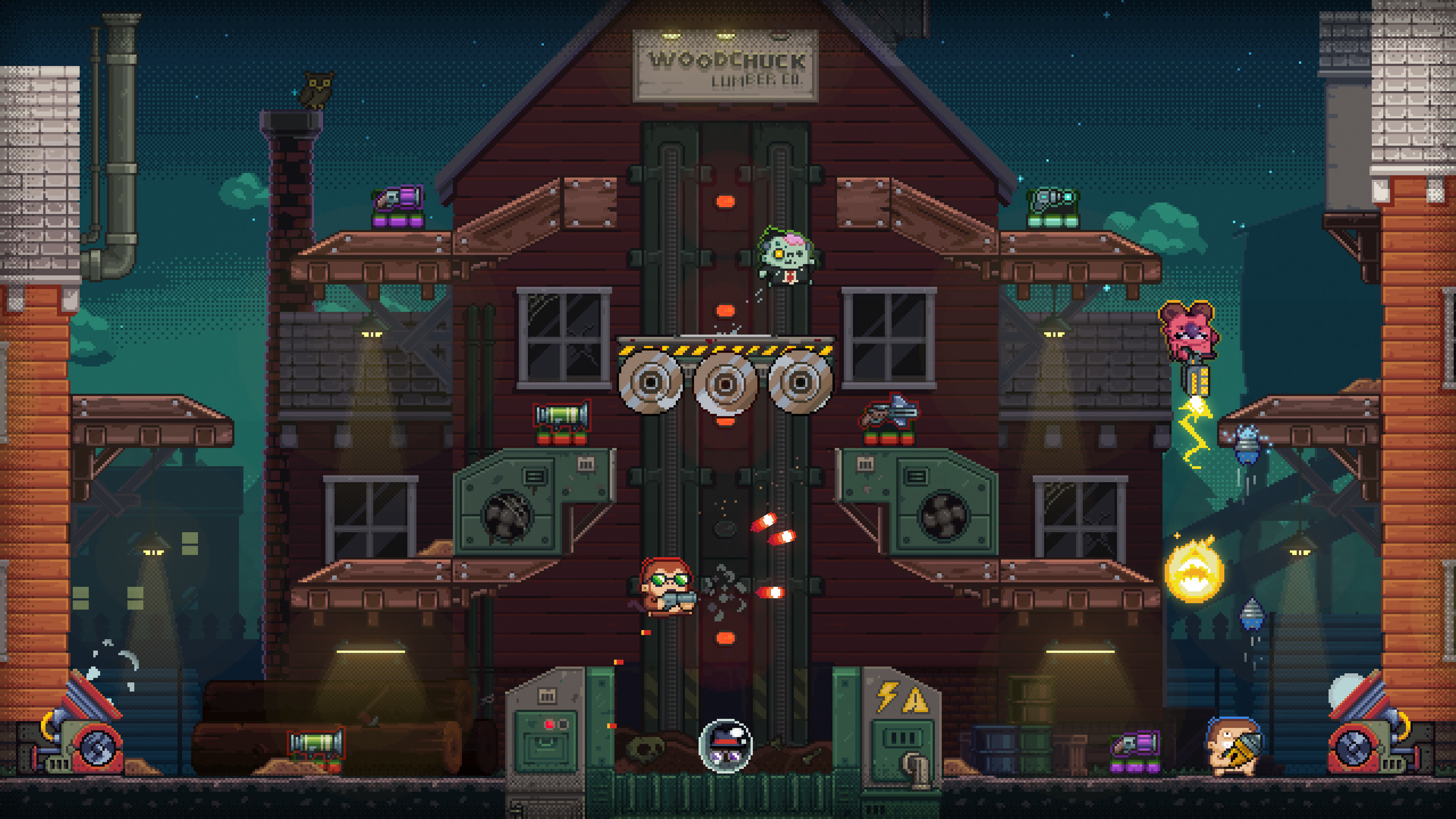 Guntastic looks visually stunning, has a great soundtrack that matches the tone of the game, & is a blast to play with friends. However, the lack of content was a bit of a shock. You truly can experience everything the game has to offer in around 10 to 15 minutes. This is probably partly down to Guntastic having such short matches, but I think there are bigger issues lurking away that would have allowed this game to shine a bit brighter than it does.

There is absolutely nothing to unlock, and I feel that is a staple of fighting games, no matter what specific genre they fit in. Finding a secret character or discovering new maps to fight on is amiss here. The game includes just 6 arenas to cause mayhem in, and apart from the visual identity they all play almost identically. One map has platforms that will rise once stood on, one has portals allowing you to travel across the map faster, and another has springs, which again cause the player to travel upwards. There is a lack of individuality, and it made me feel that a lot more thought could have gone into the areas where people are going to be spending the majority of their playtime in. 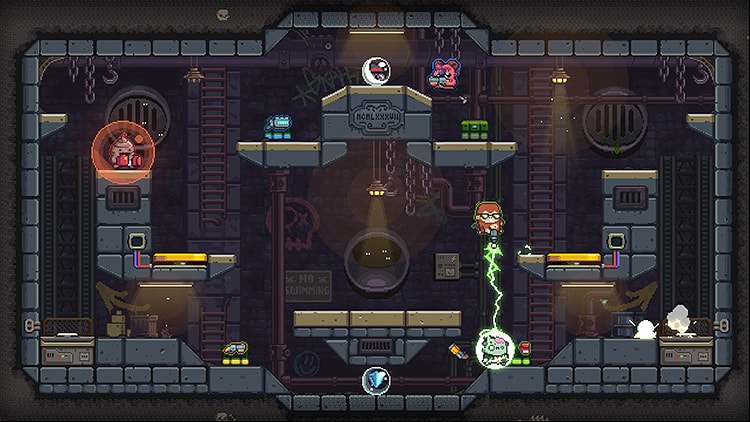 The characters are all nicely designed; they all seem to have that ‘done before’ feel though. There is a zombie, monkey, unicorn, devil, and various others. Each character handles and plays exactly the same, and I feel like this is where the game goes wrong. There is no reason to choose one character over another, other than you may like how they look. There just feels to be a lack of context for everything in Guntastic, the characters have their designs and the arenas have their designs.

I just feel something has been missed here because the gameplay isn’t actually all bad. It’s fun, fast but limited. Where are the character unlocks? Where are the map unlocks, and where are the character skin unlocks. It’s one way players can be driven to play. Having the potential to unlock customisation options increases the longevity of games, especially in a genre like this. It’s a shame to see that Ludicrous Games’ Guntastic has fallen short.

It will be interesting to see the full consumer response to this game on release, and how Ludicrous Games responds to it. If they plan on supporting the game after launch, it really could become a great party brawler. Expand upon the round modifiers, give the player more options, and you will give the player more reasons to continue playing at the same time.

For more news, reviews, features and Christmas content from us, check out Ready Player Gone.

Will You Snail?, Final Fantasy VII Remake, Among Us and more – RPG News (22nd Jan)

Gamepass Gold or Garbage – Unto the End

Will You Snail? coming October 2021… Maybe

It’s 1999 & I go down to the local Blockbuster with my family. My parents would pick a film to rent that we would...

Gamepass Gold or Garbage – Unto the End

Welcome to Ready Player Gone's latest feature 'Gamepass: Gold or Garbage?' Where we play a game available on Gamepass at random and let you...

Romance in the Entertainment sector is nothing new. However, when these begin to transcend the superficial realms of the surface-level relationship, you begin to...

Congrats you made it to 2021, glad to see you here! I hope you all had a great Christmas and New Year, let's hope...

Over the course of the Holiday season, here at Ready Player Gone we will be bringing you a feature article each day - with...

Feel free to get in touch if you feel you could contribute to www.readyplayergone.com

We are a small team so always open to considering new people!

It’s 1999 & I go down to the local Blockbuster with my family. My parents would pick a film to rent that we would...

Over the course of the Holiday season, here at Ready Player Gone we will be bringing you a feature article each day - with...

Come November 19th, we're going to finally be able to live out our futuristic fantasies in the form of Cyberpunk 2077, with no fears...

Is Valhalla what I want in an Assassin’s Creed game?

Way back in the time of Ezio Auditore da Firenze - no, not the late 1400s - while running along the rooftops of Rome,...

Does the Nintendo Switch need to compete?

November is closing in and with it comes new consoles, major game releases and the onslaught of Christmas music. Originally, this post was going...